The Fox Went Out on a Chilly Night by Susan T. Pelham - 1000 piece jigsaw puzzle 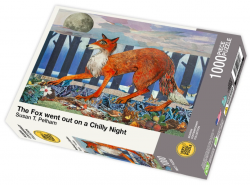 Susan Pelham's work can look like a painting before you realize it's a collage, artfully layered together from many different images into a whole that tells a story. Originally from Cairo, Georgia, Pelham attended Florida State University for a fine arts degree in the early 1960s, where she was inspired and intrigued by the work of the magic realist painters of the late 1940s. Artists like Paul Cadmus, George Tooker and Ivan Albright created finely observed and rendered scenes in which reality was askew. More down to earth than surrealism, magic realism was less another world than a world seen through a distorting lens, often driven by narrative as much as imagery. Pelham's experience studying art history at Sotheby's gave her a bigger deck of cards from which to work, and she says that Hieronymus Bosch's elaborate scenes seem to her the foundation of surrealism.

Pelham says that, although she took collage classes at FSU, the medium didn't grab her interest until about 10 years ago. While painting a portrait of her young grandson, she added a cut-paper environment behind and around him, relishing the opportunity to add story through those flourishes. Now, friends bring her old magazines and ones that feature lots of color on high-quality paper. She likes to work in art history jokes, like Grant Wood's trees and Magritte's trains, but "The Fox Went Out on a Chilly Night" doesn't have any of those secrets. Instead, it takes as its inspiration the traditional folk song about a sneaky fellow out on the town looking for some fat poultry to feed his little ones. Pelham doesn't picture the entire story, but she suggests much, including the rollicking tempo of the song through the fox's pose. His human eye, likely from a fashion magazine, lends a bit of magic realism to the image.