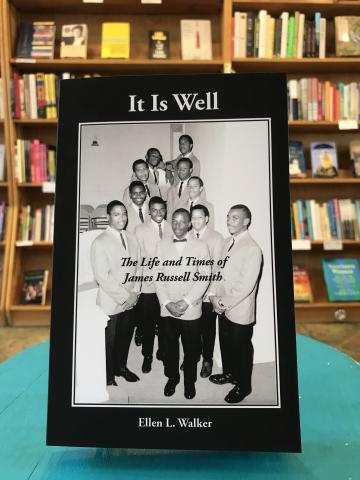 It Is Well is the biography of James Russell Smith, an African American man born in Athens, Georgia in 1941. Smith grew up in the Jim Crow South and attended segregated public schools. He was a student at Tuskegee Institute during the Civil Rights Movement and sang in the renowned Tuskegee Choir. He returned to Athens to teach in his (still) segregated high school, and later became the founder and director of the Athens Voices of  Truth community choir. In creating the choir, which specializes in sacred music including gospels, hymns, anthems, and spirituals, James sought to preserve the roots of sacred music, focusing on the traditions that helped African Americans survive slavery. It Is Well places Smith’s life in the context of the history of Athens and the challenges faced by a Black man growing up in the South during this crucial period in American history.

Ellen Walker is a graphic designer living in Athens, Georgia. Born and raised in St. Louis, Missouri, she earned her B.A. in Art and Elementary Education from Grinnell College in Iowa. She has worked as a professional graphic designer for over 40 years in Ann Arbor, Michigan, upstate New York, and now Athens. She also lived for two years in a small village in Malaysia, where she taught in the local school and assisted with anthropological research. She earned her M.A. in Design from Syracuse University and taught elementary school in Athens for several years. She continues to do freelance graphic design work. She has always loved to write. This is her first book.