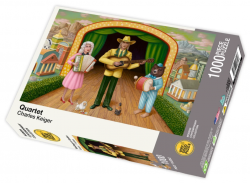 Charles Keiger's "Quartet" presents a set of four musicians: a woman in a pink dress with an accordion, a long-haired man with a guitar, a bear holding a drum and, the hardest to notice, a toy poodle stepping on a horn. They stand on a proscenium, with a bunch of Memphis-style architecture and some faraway mountains in the background, rosy clouds in the sky that are as artificial as any stage background. A bottle of whiskey sits on the ground. The artist admits to René Magritte as a strong influence, and although Keiger's surrealism feels gentler and more cheerful, there are similarities: the clouds, the preoccupation with doubling, the people moved around like paper dolls.

The image feels equal parts winking and sincere, a combination of new and old country, as Keiger says, quite likely influenced by the TV show "Hee Haw." Not only is it visually symmetrical, but it's balanced in terms of the opposites it presents: indoors and outdoors, animals and humans, male and female, East and West, desert and river. He says, "I start each painting with a line down the center and everything plays off that line. I've never really thought about it, it's more of an intuitive choice. I can treat the subjects as abstract forms that guide the viewer around starting with the center."

Keiger was born in Asheville, North Carolina, and went to the University of South Carolina for his undergraduate degree in art. He got his MFA at the University of Georgia in 1982, where he studied with Jim Herbert and Judith McWillie, and one might spy Sanford Stadium's famous hedges bordering the stage in this picture. He says he started off as a completely abstract artist, but by the time he hit his 30s, he also hit a wall and started doodling circus-inspired watercolors on the side. Those whimsical works led to what he's been doing for the past 30 years. Based in Atlanta, he has shown his work throughout and outside of the Southeast, and it is in hundreds of private and corporate collections. 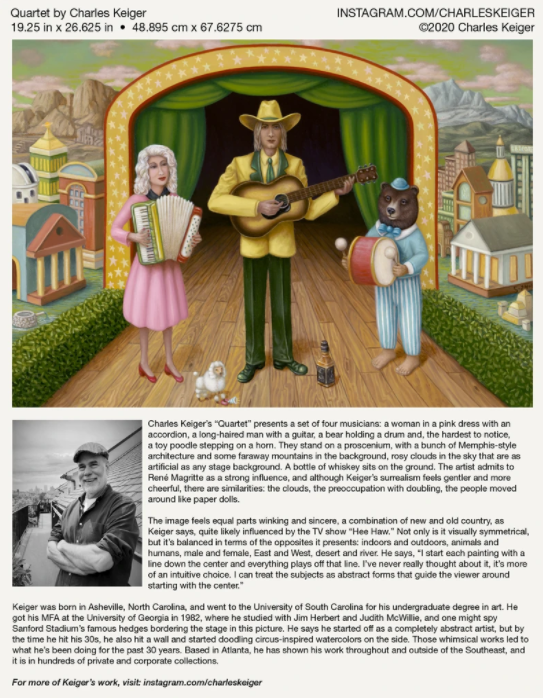