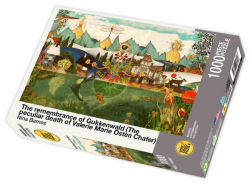 Nina Barnes’s art is caught between two natural extremes: the stark strangeness of her native Norway and the lush jungle of her adopted state of Georgia. She moved to Athens, Georgia, in 2002, where she has worked on projects that combine performance art, music and video with the bands of Montreal and Harouki Zombi. Her process is accumulative. She collects vintage botanical illustrations that she then cuts up and turns into collages. She augments them with watercolor and drawings, then scans the results, tinkers with them digitally, prints them, and adds more handwork. She continues in a cycle until she feels a work is complete, up to a year sometimes for a single work. She says, “there’s always something I want to tinker with.”

Barnes says, “There’s a starkness and strangeness to the wilderness of my childhood in the northern regions of Norway (way past the arctic circle) that I cherish more than anything else, but I was taken by the humid green world of Georgia in equal ways: it felt exotic and a little bit dangerous and so it fueled my imagination in new and surprising ways. I think my art is a meeting of those two worlds in some way, a symbiotic inner landscape of a world I would like to be in.”

“The remembrance of Gukkenwald (The peculiar death of Valerie Marie Osten Chafer)” comes from a not-yet-finished series of works based on a writing experiment of Barnes’s. Gukkenwald in 1919, as you might guess, is not a real place, and Barnes has populated it with the inhabitants of a sanatorium. There’s a lot to look at in the scene, with a busy lake taking up the bottom third of the image, animal life intruding at different scales, snowy hills, sharp mountains, and plant life everywhere, sitting atop mountains in poses we usually associate with saints. Barnes says she draws from late Medieval paintings and early Renaissance paintings, and both her composition and her colors bring them to mind. 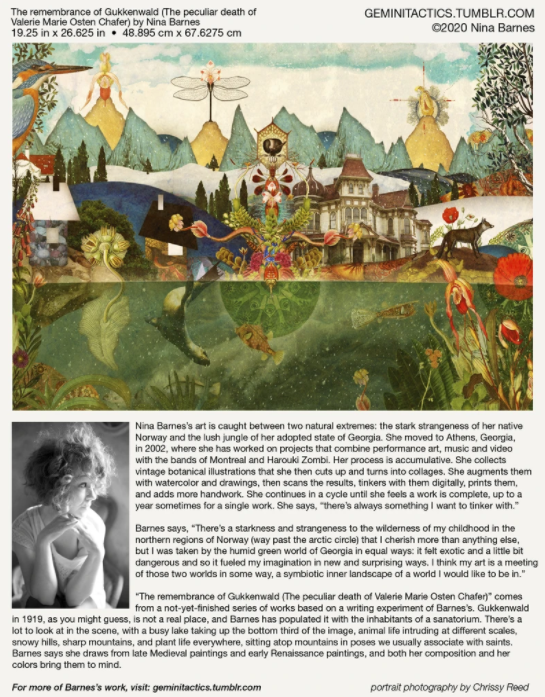