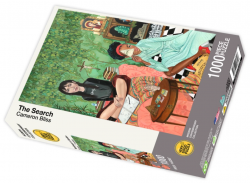 The more you look at Cameron Bliss's work, the more you see. Although Bliss started out painting landscapes, she shifted gears a few years ago to focus on people, most often women, who stare out at the viewer with wide eyes. Although they appear indoors, the interiors Bliss creates often include plant life in the form of potted flora or in the patterns with which she decorates wallpaper, bedding and more. She says, "I like the idea of the inside being outside and vice versa, whether it's our person or our environments." Her women often appear in pairs, encouraging us to compare and contrast, and their surroundings feature objects that our brains try to unpack.

"The Search" is both rich with and about meaning, featuring a crucifix, a Buddha, a Russian icon, string theory diagrams, Tarot cards, a palmistry figurine, a Ouija board, a tardigrade and a house Bliss says was inspired by St. Teresa of Avila's concept of the soul as a castle. The woman on the floor holds up a triangle that could be a planchette featuring the Masonic Eye of Providence, taking the place of her own eye. Bliss says, "there are many paths along the way; this is just a little blurb in these girls' lives." In other words, the painting itself is a kind of puzzle, which makes it a perfect choice for a puzzle.

Bliss studied at the Savannah College of Art and Design, as did her mother and grandmother, and lives in Winterville, Georgia, where she serves on the Winterville Arts Council. Her work hangs in private collections around the world. Bliss says, "If you were to step into one of my paintings, you might feel as though you suddenly interrupted a deeply intimate exchange." She cites painters like Alice Neel, Eric Fischl, and Chantal Joffe as inspiration, and her work has the same desire to use paint impressionistically. When she refers to her people as "moody," she doesn't just mean that they're not always cheerful (although they're not!). Instead, each portrait, which she generates from her imagination and photographs, serves not as an image of a real person but as an expression of something inside the artist herself.